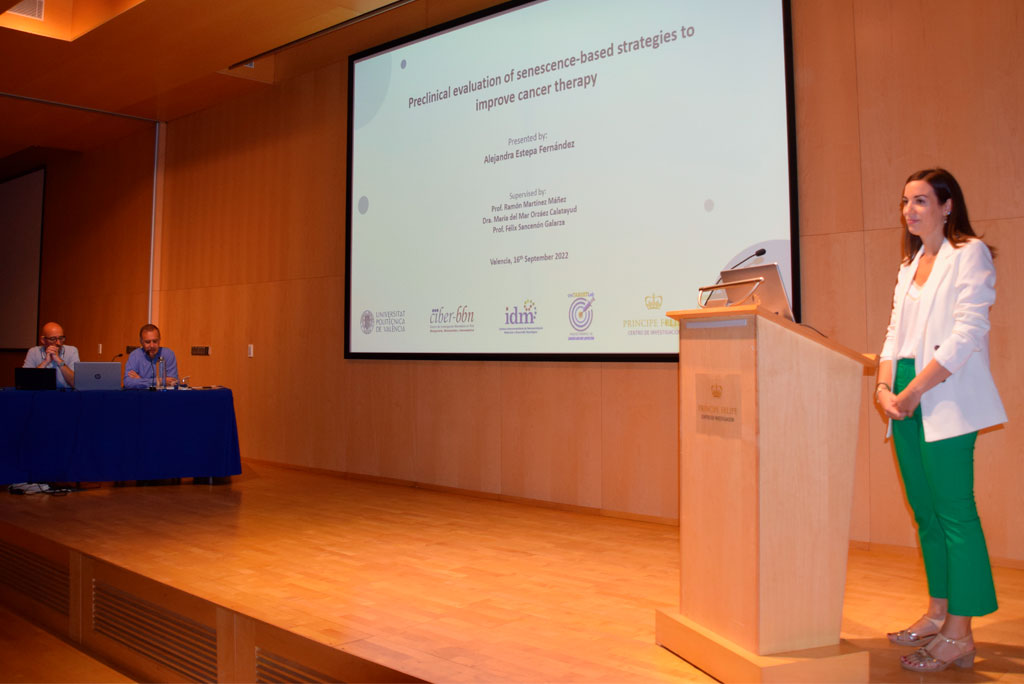 Given the complex role of senescence in tumorigenesis, this doctoral thesis focuses on exploiting senescence as a therapeutic option for cancer treatment. We achieve this general objective through the design, synthesis, in vitro characterization, and in vivo evaluation of several nanodevices and prodrugs in different cancer models as well as through the identification of new senolytic molecules, in order to improve cancer therapy. This doctoral thesis, distributed among four chapters, has focused: (i) on the evaluation of the negative role of endothelial senescence in promoting metastasis after senescence-inducing chemotherapy in breast cancer; (ii) on the exploration of the beneficial effects of combined pro-senescence and senolytic therapies to improve the antitumoral activity and to reduce metastatic burden in breast cancer, (iii) on the design and evaluation of a targeted-tumor delivery system based on two mesoporous silica nanoparticles that communicate by stigmergy, combining targeted pro-senescence and senolytic therapies; and (iv)on the identification and evaluation of new senolytic compounds to target malignant melanoma.

In the first experimental chapter, we evaluated the negative effect of endothelial senescence in the tumor context and the consequence of its elimination through the use of the senolytic navitoclax. We found that systemic treatment with palbociclib in an orthotopic model of breast cancer in mice induces senescence in vascular endothelial cells, generating an altered endothelium that favors the migration of cancer cells. Recovery of endothelial functionality was achieved, after palbociclib-senescence induction, by removal of senescent cells (senolysis) with navitoclax-loaded nanoparticles (NP(nav)-Gal). In a preclinical model, the combined treatment of palbociclib with NP(nav)-Gal decreased endothelial senescence in veins as well as in metastatic nodules in the lungs.

Taking into account the results obtained, chapter two describes a similar therapeutic strategy for triple-negative breast cancer. In this case, a human xenograft mice model was employed to evaluate the effect of combined therapy of palbociclib plus navitoclax. To overcome the side effects of navitoclax treatment (mainly thrombocytopenia), we evaluated the effect of the prodrug nav-Gal. Palbociclib therapy-induced senescence, followed by adjuvant navitoclax or nav-Gal therapy, resulted in synergistic clearance of senescent tumor cells and reduction of tumor growth and lung metastasis in the xenograft mice model of aggressive human TNBC.

Chapter three focuses on the design and development of a new stigmergy nanoparticle communication system to improve tumor therapy in breast cancer. The communication of nanoparticles by stigmergy consists of a sequential system of two nanoparticles in which the first modifies the environment allowing the second nanoparticle to act. To do this, we again rely on a two-step therapy, the first step being the induction of senescence with palbociclib in tumor cells and the second its subsequent elimination with navitoclax. To this end, two nanodevices were prepared: the first nanodevice (NP(palbo)PEG-MUC1) was loaded with palbociclib and functionalized with an aptamer targeting the surface protein MUC1, frequently overexpressed in breast tumor cells; for the second nanodevice, the senolytic nanoparticle NP(nav)-Gal was used. When both nanoparticles were administered sequentially, an increased effect was achieved, delaying tumor growth and reducing lung metastases in the previously described model of hTNBC xenograft mice.

In the last chapter, we identified a new senolytic agent (H14) that can kill senescent melanoma tumor cells with optimal efficacy and safety in vivo. For this, a combinatorial library of D-amino acid hexapeptides was screened in senescent SK-Mel-103 melanoma cells, in which senescence induction had occurred by treatment with palbociclib. The combined treatment of palbociclib and H14 hexapeptide achieved an improvement in the elimination of senescent tumor cells in vivo, as well as in the reduction of tumor growth, reaching similar effects to the combined treatment of palbociclib and navitoclax.

Future breakthroughs in the field of cellular senescence treatment are expected. We hope that the results achieved in this Ph.D. thesis will open new research opportunities and inspire the development of advanced strategies with smart nanodevices and prodrugs for their application in the field of cellular senescence and other different biomedical areas and in sensing and communication technologies to solve patient needs.